The event will explore her work as US Ambassador to the UN and under the Obama Administration and ways we can each advance human dignity.


The event will be loosely based on themes from her new NYT bestselling book "The Education of an Idealist." She will take questions from the audience during the event and will sign books immediately following the event. Please RSVP here: https://bit.ly/37tirok. Seating is limited.

Samantha Power is a Professor of Practice at the Harvard Kennedy School and Harvard Law School. From 2013-2017, Power served as the U.S. Ambassador to the United Nations and as a member of President Obama’s cabinet. From 2009-2013, Power served on the National Security Council as Special Assistant to the President for Multilateral Affairs and Human Rights. Power began her career as a journalist, reporting from places such as Bosnia, East Timor, Kosovo, Rwanda, Sudan, and Zimbabwe, and she was the founding executive director of the Carr Center for Human Rights Policy at the Kennedy School. Power’s book, “A Problem from Hell”: America and the Age of Genocide won the Pulitzer Prize in 2003. She is also the author of the New York Times bestsellers Chasing the Flame: One Man’s Fight to Save the World (2008) and The Education of an Idealist: A Memoir (2019), which was named one of the best books of 2019 by the New York Times, Washington Post, Economist, NPR, and TIME. Power earned a B.A. from Yale University and a J.D. from Harvard Law School.

The Takemi Program in International Health seeks to improve health and health systems around the world by welcoming mid-career health professionals and scholars to the Harvard T. H. Chan School of Public Health to conduct path breaking research and develop their leadership skills.Takemi Fellows examine problems of mobilizing, allocating, and managing scarce resources to improve health, and of designing effective strategies for disease control and prevention and health promotion, with a focus on low and middle-income countries. 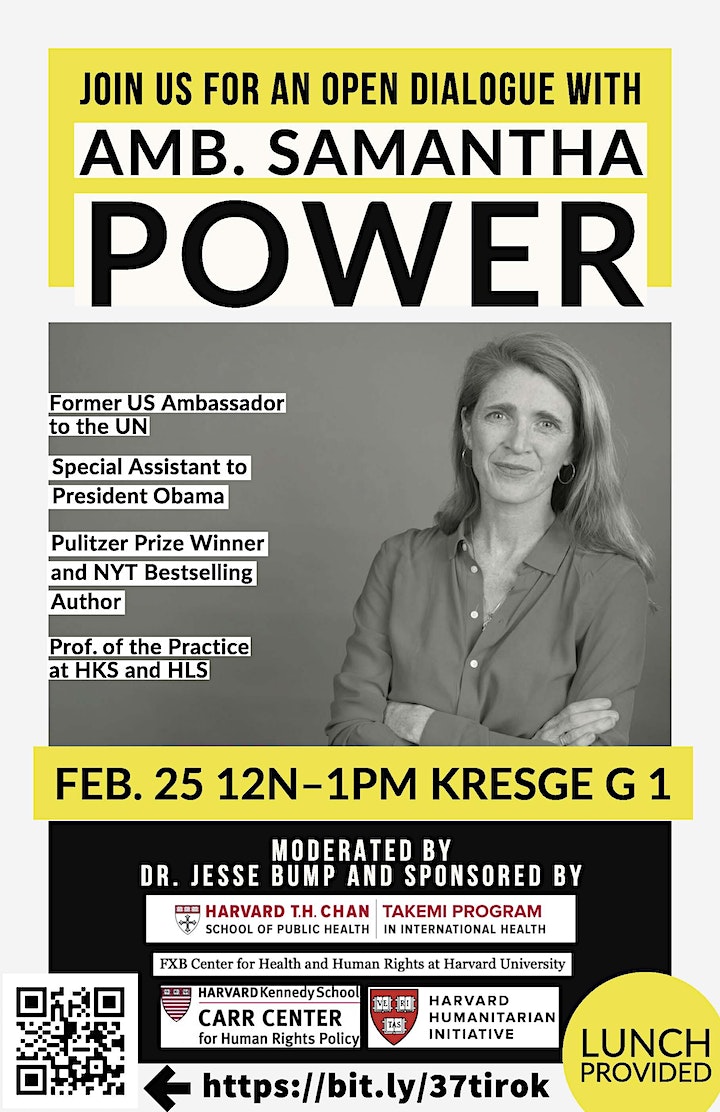 RSVP here: https://bit.ly/37tirok or via the QR code on the poster.

huntington ave 655 huntington avenue 655
boston, 2115, ma, us
Event from
eventbrite.com
Are you an event organizer?
Create events for free. They will be immediately recommended to interested users.
Create event

boston, 2115, ma, us
Browse other venues in Brookline
Discover now

eventbrite.com
Are you an event organizer?
Create events for free. They will be immediately recommended to interested users.
Create event
Check out other events in boston

Stay updated on An Open Dialogue with Amb. Samantha Power and find even more events in boston.