The Lavonia Perryman "Welcome to My World" Show will also celebrate their one year anniversary during this event!

For Colored Girls Who Have Considered Politics is a sweeping view of American history from the vantage points of four women who have lived and worked behind the scenes in politics for over thirty years―Donna Brazile, Yolanda Caraway, Leah Daughtry, and Minyon Moore―a group of women who call themselves The Colored Girls.

AS AN HONORARY HOST YOUR DONATION INCLUDES:

***DONATIONS WILL NOT BE ACCEPTED ON SITE/ AT THE DOOR***

ALL donations are nonrefundable, tax deductible, and payable to: National Congress of Black Women

Donna Brazile, a veteran Democratic political strategist, is an adjunct professor at Georgetown University, author, television political commentator and former Interim Chair of the Democratic Party. She is the author of Cooking with Grease and the New York Times Bestseller Hacks.

Yolanda Caraway is the founder of The Caraway Group, Inc., a nationally recognized public relations and public affairs agency. She has played a major role in shaping the goals and objectives of the National Democratic Party.

The Reverend Leah Daughtry is a nationally recognized preacher, speaker, organizer, leader, strategist and CEO of the 2008 and 2016 Democratic National Conventions.

Minyon Moore, is a partner at the Dewey Square Group, was formerly CEO of the Democratic National Committee, and served as Assistant to the President of the United States and director of the White House Office of Public Liaison, and director of White House political affairs under President Bill Clinton. 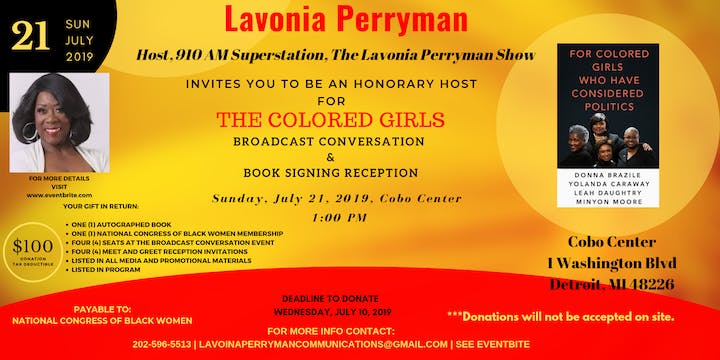 eventbrite.com/e/t...41?aff=ebopdstevensi
Event from
eventbrite.com
Are you an event organizer?
Create events for free. They will be immediately recommended to interested users.
Create event

The best nearby experiences from our partners

eventbrite.com/e/t...41?aff=ebopdstevensi
Event from
eventbrite.com
Are you an event organizer?
Create events for free. They will be immediately recommended to interested users.
Create event
Detroit ›
The National Congress of Black Woman and Lavonia Perryman Communications ›
The Colored Girls Broadcast Conversation & Book Signing Reception
Check out other events in Detroit